It didn’t start out as the best of weeks for the New York Mets. The offense went dead against the Chicago White Sox, including the embarrassment of Wednesday’s debacle in which the team generated one run off 13 walks. Then word came that David Wright would miss extensive time because of his prevailing neck issue. However, the Amazins’ righted themselves, taking the first two games of a weekend set against the divisional rival Miami Marlins. 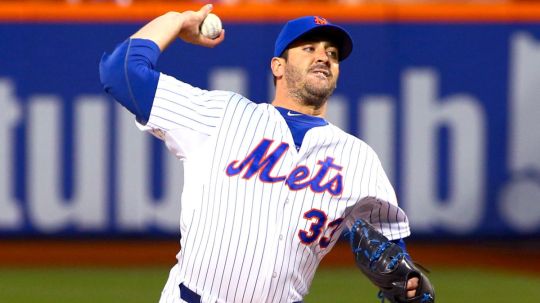 As for the New York Yankees, their offense went missing in Toronto, scoring only three runs in total as they were swept by the Blue Jays. However, from Thursday through Saturday, the Yanks exceeded five runs in each contest, winning two of them. A little worrisome, though is the slumping of Dellin Betances. Hopefully, this is just a funk he is in, something that only lasts short-term. If not, you might just kiss the rest of the Bombers’ season goodbye.

On to the highlights:

It is way too early to declare Matt Harvey as “back” However, his performance on Monday proved he wasn’t dead. His seven shutout innings gave the Mets their only victory against the White Sox.

With Wright, Lucas Duda and Travis d’Arnaud out for extensive time, New York needs to find other avenues of offense. Backup catcher Rene Rivera gave the club a boost with this two-run home run in Friday night’s 6-2 victory in Miami.

Saturday’s game belonged to newcomer James Loney. He went 3 for 5 with an RBI and a run scored. However, it was Matt Reynolds‘ pinch-hit single in the eighth inning that put the Mets ahead for good.

One hit was all the Yankees needed on Sunday. Starlin Castro‘s two-run shot gave New York a 2-1 win and a series victory over the Rays in Tampa.

Castro again figures into this set of highlights as his sparkling double play with Didi Gregorius helped the Yanks to a 5-4 victory over the Detroit Tigers.

The stolen base is kind of a lost art. However, stealing home has been Jacoby Ellsbury‘s forte in 2016.  For the second time this season, Ellsury scored a run this way as the Yanks held on for an 8-6 win. He was on the front end of this double steal as Brett Gardner took second.