The bullpen of the New York Mets can sometimes leave a little bit to be desired. Jeurys Familia has not been the dominating presence he was a year ago.  Addison Reed and Jerry Blevins have nice and shiny ERA’s but do you really trust either of them? Antonio Bastardo has been mediocre and Hansel Robles is a home run waiting to happen. Does Jim Henderson cut it for you? In order to make another World Series appearance, the Mets need themselves another arm out of the ‘pen.  Fans, I have the perfect guy for you, a man who can both close and be the lockdown eighth inning guy. 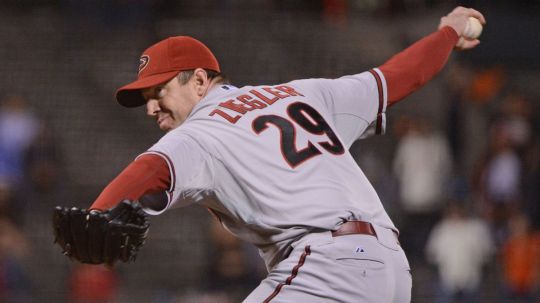 The Arizona Diamondbacks have been the most disappointing team in baseball so far. Projected to be a strong National League West contender, the D’backs are a mess, already ten games behind the division leader San Francisco Giants. Admittedly,  Ziegler hasn’t had his best season, either. Though nine for nine in save opportunities, opponents are hitting .286 off him and his control hasn’t been spot on either with ten walks in 22 innings. However, that can be attributed as a by-product of how badly his team is performing. Focus on his complete body of work and you will see that all the 36-year old needs is a change of scenery. Just last year, he saved 30 of 32 games after current Met Reed was demoted from the closer’s role. Ziegler finished the season with a 1.85 ERA in 66 games, throwing a total of 68 innings. Over the course of his career, he has been one of the better relievers in baseball with an ERA of 2.50 in 556 games.

Trading for Ziegler is very attractive for a number of reasons. Number one, is that he is a free agent after this season. He has a very reasonable contract, making $5.5 million dollars this season. Based off his subpar numbers, the D’backs aren’t going to be asking for the moon. They need to replenish a farm system that has seen a number of prospects dealt away in the offseason. Another reason why Ziegler would be perfect for the Mets is his ability to both set up Familia and close if needed. Zielger became the D’backs closer by necessity in 2013, 2015 and this season because of the inability of one person to hold down that position. His ideal role is in the seventh and eighth innings.  I have seen him come into a game with runners on base and one out, throwing a single pitch, and bail his team out. Trade for him now and he immediately becomes the Mets’ 1A reliever.

The Mets need a shot of something after appearing lifeless over the past few days. Their offensive output will continue to be a problem as long as key players are hurt.  Now is the time when their pitching has to be near perfect. It’s time to address this by making a trade for Brad Ziegler.